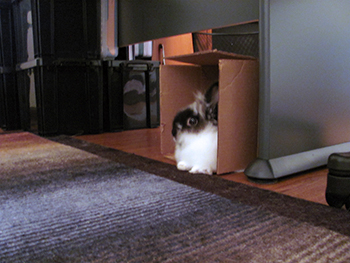 Earlier this month I wrote about how we had ordered the  Deluxe Hopper Hideaway from Busy Bunny. They were on vacation when we ordered, with orders to ship again beginning this week. Well, Leo’s new hideaway arrived today.

All has not gone exactly according to how we had hoped, but is kind of going according to what we expected. Leo is really good for channeling a freak out personality similar to Tigger. The whole time the hideaway was being put together, Leo was hiding in a corner of the room and starting at every noise.

It is now in place where his little box stood, but I don’t dare try to take any pictures yet. He has hopped in, checked it out, chinned it and nibbled at it a bit.  However, when he hops away from it to another part of the room, it is like he forgets he was just there and it was okay and he is scared that his space is different. We are dealing with lots of hiding out, thumping and scrambling runs for cover if anybody moves too suddenly or makes unexpected noises.