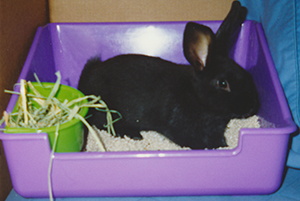 Eleven years ago on July 4th, we met Shadow for the first time.  Tigger was about four months old.  We had just boarded her for a weekend a couple of weeks earlier.  She had been so lonely, it had made us realize we needed to find her a bunny buddy.  We hadn’t had any opportunity to make plans for that or explore our options.  On the 4th, we were just back at the mall pet store to pick up some supplies for Tigger.

As we came in, we saw that there was a new batch of baby bunnies, more than a dozen in a front window enclosure.  I went back to the aisles to get what we needed for Tigger while Blaine stopped to pet some little bunny heads.  He reached his hand in to pet those closest to where he was standing.  Four feet across the enclosure the tiniest of the babies, an all black bunny, saw Blaine’s hand and came running at top speed over to Blaine.  The bunny rabbit sat up on hind legs and started nibbling at the hairs on Blaine’s hand.

I was told about the racing over introduction, I didn’t actually see it.  What I did see as I walked back to the front of the store with things for Tigger was Blaine holding a really cute and very tiny black baby bunny in his hands.  Looking at the two of them, even without hearing the story, I knew they had chosen each other just as Tigger and I had chosen each other two months before.  It was clear we were going home with more than just food and supplies for Tigger.  I hoped things would work out all right with them liking each other, but that was a problem for the future.  Right now I was looking at one of the cutest baby bunnies I had ever seen.  The rabbit was a ball of fluffy black fur all over.  It looked like Blaine was holding a Tribble (old Star Trek reference) with big ears.

For the moment, we needed to make arrangements for our new little friend.  We made sure we were bringing home enough supplies for two bunnies.  The pet shop didn’t have a cage for a rabbit, so we were going to have to take our new friend home and then find one somewhere else.  We knew enough to know that the two rabbits would need to be separate until we were sure what sex they both were and then likely until after being fixed if we had a boy / girl pair.  We also needed to find out more about safely introducing rabbits to each other.  Since Tigger was about four months old, she was nearing her full size while our new bunny was just a two month old baby.  Tigger at four pounds was currently twice the size of the new bunny. 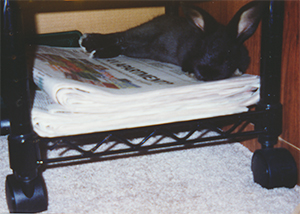 I was a bit concerned bringing our new bunny rabbit home without a cage.  Everything I had read had indicated it was a good idea to let rabbits settle in to their cage and feel safe and then allow them to explore their new surroundings as they felt comfortable.  Tigger had followed that pattern and had hung back in her cage the first few days before she really took off making every space she explored her own.

My fears of the new bunny feeling insecure or afraid were unfounded.  After we got home, I let our new friend explore the new surroundings while Blaine headed out to find a cage.  While Blaine was gone, our new little friend showed no sense of needing any place to hideout.  The bunny hopped all over the room, excitedly checking everything out and then hopped up on a pile of papers we had on a shelf of a rolling file cart and took a nap.  After the nap, our new little buddy continued on with the explorations.  Our new friend had so much energy and interest in everything!

Blaine returned with a cage which we set up next to Tigger’s so that they could get used to seeing and being close to each other.  We hadn’t decided on a name yet for our new friend.  We were talking about Ebony or Ebunny.  The next day, while letting our new friend run around, I kept losing him / her (who knew at that point?).  That is when I realized for the first time that we had brought home a rabbit who understood the concept of camouflage.  Our new bunny friend would find the darkest corner in the room or the darkest piece of furniture and would sit absolutely still blending in so well that it was a case of now you see the rabbit and now you don’t.

When Blaine returned home from work, I told him I thought we should call our new friend Shadow because of the bunny’s uncanny ability to find and blend into the shadows.  Shadow came to be such an appropriate name, first for the ability to hide in plain sight and then later being overshadowed by Tigger at times, but also playing her willing shadow and accomplice at others.

Coming on Friday, Shadow visits the vet for the first time …

3 thoughts on “First Meeting with Shadow”