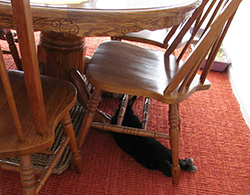 So how did we come to have a carrot colored rug in our dining room? When we first bought our home, the previous owners left behind their room sized rug.  It was solid black with a border in black and cream.

We had two problems with that rug.  The first became obvious the night I walked into the dining room when the dimmer switch for the light was set on low.   Part of the rug ahead of me moved, freaking me out.  Black rabbit + black rug = bad idea.  Shadow was going to get stepped on if we didn’t do something.  The second problem was that the bunnies liked it way too much and carpet isn’t good for rabbit digestive systems.

When we were investigating a replacement, our vet suggested getting a jute rug.  She said that the natural fiber would be better for  rabbit systems if they decided they just had to have some.  So I hit the internet looking for room sized and reasonable.  I wanted to find a jute rug that was reversible, meaning no latex backing.  We didn’t need to worry about the rug slipping, since there would be an oak dining room table and six chairs keeping it where it belonged.  We wanted to be sure it was jute through and through so that it could be flipped for double the wear.

I found an online store that had the rugs for a reasonable price, but the colors were mostly icky muddy, unappealing shades and one bright color, carrot orange.  I think the catalog actually called it burnt orange, but then a catalog called our office paint color desert sunset.  That really is pumpkin and we need to repaint sometime.  Paint doesn’t always darken as it dries.

So what else would I buy for a rabbit friendly rug?  Of course it had to be the carrot orange.  This is actually the second carrot orange jute rug to fill the dining room space.  Our dearly departed Portia bunny chewed huge holes in the first one while she occupied the first floor all by herself.

Tigger and Shadow are enjoying hanging out on their carrot patch.  They love the sunshine that floods in the bay window during the afternoons.