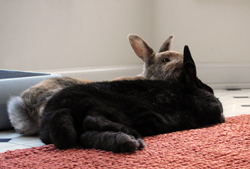 After ten years of having Tigger and Shadow, I have come to the conclusion that how they communicate with each other will remain a mystery.  You look at this picture and just think, “Awwww, such cute bunnies”.  I have a lot of pictures just like this and they are so adorable!

Then you have the flip side, the one I don’t usually get on film.  occasionally, right after a moment like this, one or the other will suddenly get up, hump the others head, nip a behind, bat paws on the other, push or shove or chase the other off.

Blaine or I get them sorted out again and settled down, usually side by side or head to head for petting.  They go back to being sweethearts.  We are left shaking our heads wondering what on earth they said to the other to go from snuggles to arguing.

We often wonder if there is bunny body language we are missing or some sound they make too quiet for us to hear.  Maybe they can feel some change in the other’s body when they are that close.  I know rabbit’s noses are really sensitive, perhaps somebunny starts giving off a scent that is mood related.

We do know that Tigger keeps score on who grooms who more.   If we are watching them and see her doing most of the grooming, we will start to pay attention to petting both of them right away before she gets aggravated that she isn’t getting her fair share.

That doesn’t seem like the whole of it, though, because Shadow gets miffed with her too,  even though she does more grooming of him than he does of her.  This appears to be a secret that the rabbits intend to keep.  I don’t think they want us breaking that rabbit to rabbit code.

2 thoughts on “Rabbit to Rabbit Communication”