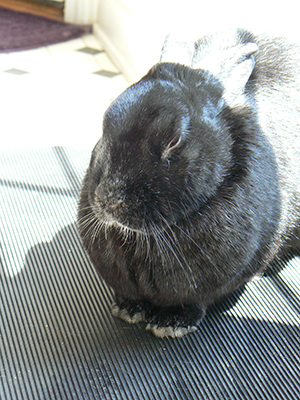 The last year and a half of Shadow’s life, he had trouble with allergies. During the spring and fall seasons when humans would be sniffling, sneezing and having a post nasal drip, Shadow would be sneezing too. We could tell he was also experiencing a post nasal drip, because like many humans, he would put his nose up higher in the air, stretching out his neck and then we would see him swallowing.

Shadow started to lose weight during the allergy seasons.  Blaine and I both have allergies so we could sympathize with a rabbit who either was dealing with things not tasting right or having trouble chewing, swallowing and breathing at the same time.  He went in to the vet at least every six months and we learned  the dose of antihistamine to give him as needed.  We monitored his weight and watched his eating more closely.  On the vet’s recommendation, we added some alfalfa hay back in to his diet to help him keep from losing more weight and put some weight back on.  We also started to feed him some old-fashioned oats as a treat from time to time and he appreciated the taste change of that too. Tigger in old age was packing on the weight, so we would sneak tasty treats to Shadow when Tigger wasn’t around to help perk up his appetite while keeping her access to treats down.

The last six months of Shadow’s life, we dealt with a round of on again off again respiratory infections and he was on and off antibiotics on a regular basis.  The vet was very honest with us that his care at that point was hospice care. Shadow was too old  for some tests or treatments to be done safely anymore. His care was focused on keeping him comfortable and happy. He would have some times when his breathing was more labored due to congestion.   Most of those times did tend to hit on evenings and weekends when the vet was not available.

At those times, we did for him what we do for ourselves to ease our own congestion. We would turn on the shower with water warm enough to create a warm mist in the air without it being a hot sauna like steam. Once we had the bathroom air nice and misty, we would turn off the shower and take Shadow in for 5 to 15 minutes depending on how well he tolerated it. The first time it scared him, but after a few minutes we could see him swallowing and knew it was helping to clear some of his congestion.

After that first time, he was more at ease being there and each time helped him breathe more easily again. We double checked this treatment with the vet and she suggested continuing with it as needed and also adding a humidifier or mister to his main living area. She said that if these treatments along with the antibiotics didn’t continue to help ease the congestion that we might need to add some inhalation treatments. Inhalation treatments weren’t needed for Shadow. The misty bathroom along with the added moisture of the humidifier helped to keep his congestion under control.

It might seem like this time period in hospice was a really sad time. It was in the sense we knew our time with Shadow was nearing an end. It was also a very happy time, because Shadow was a sweet and very happy rabbit who was still quite active, bouncy and playful when he was feeling like himself.  He was his happy self most of the time until just that final week when things finally started to really shut down for him. We had so many fun times with him in those final months, enjoying his play and caring for him when he needed our help.

Tomorrow a gallery of images of Shadow and next week begins the stories of Portia and the challenge of bonding Tigger and Shadow.