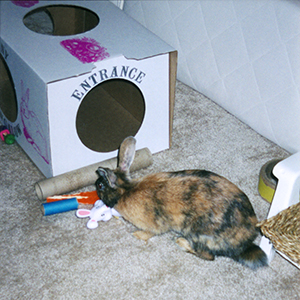 My toys must have my scent!

The title is a bit of a trick question.  As a noun, a rabbit has one chin.  Turn chin into a verb by saying a rabbit chins things and a rabbit has as many chins as they want to have.

Tigger was religious about chinning things.  She would make the rounds on a regular basis chinning everything in her cage and her play area.  I knew that rabbits had a scent gland in their chin and liked to claim things by chinning them, but I had never seen any other rabbit be quite so territorial as Tigger.  Tigger was always on the move and as she moved she would chin things.  It was almost as if you could see the little bunny mind thinking, “This is mine, this is mine and this is mine too.”   Everything was regularly and thoroughly claimed by Tigger.
It was hard to pet Tigger because she was so much on the move.  After she would hop into her cage to get her bedtime treats, she knew it was settle down time.  It was one time we could usually open up the cage door and be able to pet her (blocking it with our bodies though against potential escapes).  There was a ritual first that had to be observed before we could actually pet her.  Tigger would sniff the hand reaching in.  Then she would chin the hand.  Only then would she lay down and put her head down in position to allow the human hand to pet her.
The rituals that were so much a part of Tigger are what had us calling her Princess very early on.  She wasn’t ever ready for interaction with any living being until she had observed her rituals first.  You had to know how you had to present yourself to Tigger or she would be hopping away in a huff.  The little nose would go up in the air, the back would turn and then off she would hop, sometimes with a thump.
Anyone else have a rabbit with an abundant number of chins?

3 thoughts on “So, How Many Chins Does a Rabbit Have?”