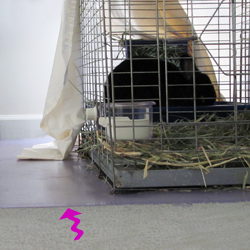 This fix for us was a bit pricier than others, but was a must do.  Even though litter box trained, Mr. Shadow decided he liked to sleep in his litter box and prefered to keep it dry.  So he started aiming outside his cage.  We were both working outside the home at the time and didn’t fully realize this until we went to do a thorough cleaning of the room and moved the cages.

Even with cleaning, the carpet is badly stained and will have to be replaced.  However, we found ourselves looking at a toss-up cost situation.  Do we spend hundreds of dollars or more  now to replace the carpet, or do we do something to protect it from further damage at this point?

In a tough economy, we opted for cleaning the carpet the best we could and then putting down a couple chairmats designed for carpeting under desks in offices.  It was a bit pricier than some of the other fixes we have done for bunnies, but a lot less expensive than replacing the floor at this point.

If you need to have rabbit cages in a room with wall-to-wall carpeting, even if the rabbits are litter box trained, they may spray.  So it is good to have something down under the cage to protect the carpet.  These chairmats are designed for carpet to help protect the pile of carpeting from being permanently crushed.

One negative is the price of them.  You can get them in a number of rectangle sizes.  We liked the ones that are a true rectangle, but price in our area ran $50 for one in the length we needed for the area and then we needed one for under each cage to get the full width.  The second negative is that brand new these have a high odor.  So we needed to put them in the garage until they lost the smell so so that we would not be causing breathing problems for either the rabbits or ourselves.

A positive now is that since these are really heavy-duty plastic, they are too hard for the rabbits to chew up or destroy.  Also, they can be swept or wiped clean quite easily.  I wish we had planned to have these right from the start, so that they were aired out and ready to go down right when we first moved into the house.