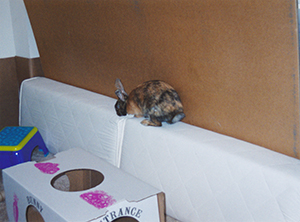 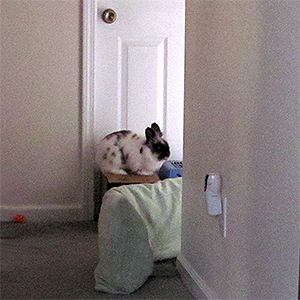 So this picture shows what we had to do to keep Tigger safe from her crazy daredevil stunt bunny desire.  You see her up on top of a couple of cushion bolsters usually used to turn a regular mattress bed into a daybed. Behind that is an enormous approximately 4 foot by 6 foot piece of cardboard. Hidden behind the cardboard are the sliding track doors to a closet.

The closet is where the story begins.  It had sliding doors that were in a track at the top and hung free at the bottom.  The closet was about six feet wide and the doors went up to almost ceiling height.  Each door was the size and weight of a regular room entry door, so they were quite large and heavy.  We didn’t see any problem with those doors in relation to the rabbits.  Then Tigger showed us the error in our thinking.

Even though large and heavy, since the doors hung free at the bottom, there was some movement to them and somehow Tigger discovered that.  We were horrified one day as we watched her run around the room to see her run up to the closet doors and stop right where the doors met and overlapped by a couple of inches.  She positioned her body beside the door on the inner track.  Tigger gave the door a sideways body blow which swung the door in a few inches, creating a brief space between the two doors. Tigger immediately zoomed into that space and into the closet. The door fell heavily back into place just a second later.

Trying to prevent this stunt took some thinking, because we could not allow her to try it again.  We pictured her misjudging the timing by just a split second and then being crushed or smashed between the those doors.  The sheer size and weight of them compared to Tigger was staggering.  So we got the huge piece of cardboard and blocked the doors and then took some book ends to hold the cardboard upright at the base and then placed the cushion bolsters in front to keep everything in place and give Tigger a new hang out to remove the memories of the closet temptation.