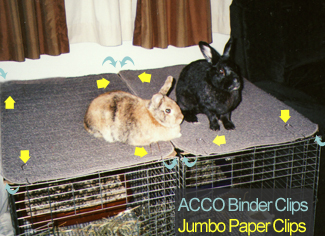 Tigger & Shadow on top of their cages

Tigger made it quite clear as a baby that she intended to hop up on top of her cage. She would sit up on her hind legs as far as she could trying to see the top, which wasn’t at all possible since she was just two pounds and the cage top was 18 inches high. However, we knew Tigger, whether she could see it or not, she was going to go there. That presented a problem, because the spacing of the bars on the cage top was too wide for even a full-grown small rabbit to safely land, let alone a baby. We needed to do something fast to make it safe for whenever Tigger decided to make the leap. 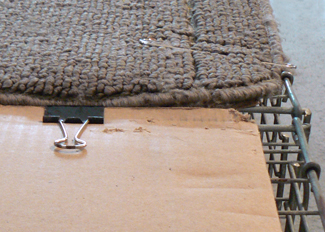 Close up of the clips in action

That was a complete success on several fronts. It made the cage top safe for Tigger to hop up. Then when Shadow joined us two months later with his own cage, we fixed his the same.  Since he could see her hopping up on top while she would free roam, he learned even more quickly than she did to hop up on top. They were kept safe from harm and it gave them an added space that they love, a bunny rabbit high ground to survey their territory. Since the cardboard and carpet are clipped on, it is very easy to take apart to clean cages, the carpets or replace the cardboard.

When they were younger they would just hop straight up and down from the cage top.  Now that they have become senior buns that is a little bit too high.  The cages are pushed up against a loveseat and the seat there is a few inches lower than their cage tops.  So now they hop up on the loveseat and then hop over to the cage tops.  In the future we may need to look at some pet steps if the loveseat begins to be too high.

For now everyone is happy with the bunny high ground.