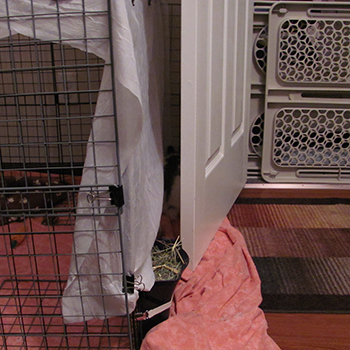 So little Leo has proved to be a bunny who likes to have secretive little lairs. He is a small bunny. Like Tigger, he has the ability to seemingly disappear completely from sight. Little bunnies get into small spaces without disturbing things to give a clue where they might have gone.

Leo is there in the first picture, but the only way you might see him is to look for the darkness of his head casting a shadow where he decided to wiggle in to hide out. The first time he headed into this little hidden lair of his, I could hear him in the room, but could not find him. It was only when I saw something move that I realized where he had gone. Shadow would hide in plain sight by using his dark coloring to just park himself in front of or on something with a deep color. The other rabbits all chose to find hiding areas that they could get in to. Tigger and Leo being the smallest of our rabbits have both been able to get in to some areas without it being at all obvious they had gotten behind or under something. Little bunnies are sneaky bunnies for getting in to places and can create some challenges when bunny proofing to keep them safe. In this case Leo has found a safe space. So he has a new little area to call all his very own Lionhead lair. 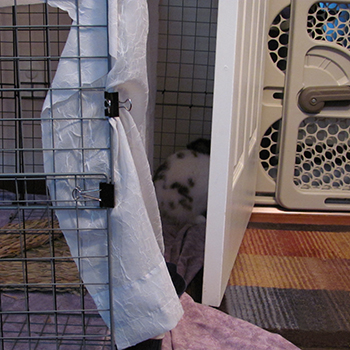 This second picture shows where he is hiding. Leo likes to sneak into the space behind the door. As the first picture shows he can do it in just inches of space that don’t disturb the door at all to give a clue he is back there. In the second picture, he has pushed at the door opening up which is why he is more visible.

This is something that reminds me of Portia. Tigger and Shadows’ main living area was our living room and the only door there was to the outside with no screen door. So the door was never open when they were out. Portia’s area was on our kitchen / dining room floor and there was a half bath there that when the door was open formed a little alcove behind the door. Portia liked to sneak into that area and would come running out of it when we would walk back into her area. It was clearly her secret space that she didn’t want to share with us. Now Leo has made a discovery of a similar secret space in his area in our office.

Tomorrow some news of what is coming up this month and next.