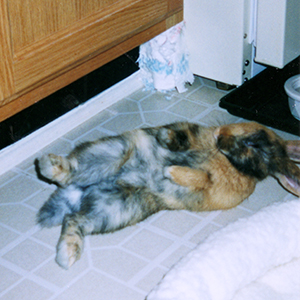 I learned Origami as a child.  My uncle went to Japan and came home with a Japanese bride.  She was so patient showing me as a young child the intricate folds and beautiful papers used in this wonderful art form.  I was fascinated by having flat squares of paper transform before my eyes into a fox, balloon, fish, hat, crane and so many other items and animals.

The crane holds special significance.  In the Japanese culture, the paper cranes have symbolism as wishes for good fortune, long life, and prosperity. They are given as wedding gifts and to newborns. Since it is thought that folding a thousand cranes will grant the folder a wish, some young girls will fold and give a thousand to a boy they admire.

Looking back over the past ten years with Tigger has me thinking a lot of now and then.  Recently paging through a book of Japanese crests, one just looked so much like a couple of lop eared bunny rabbits that it inspired me to create a bunny rabbit crest.  Since I was thinking about then and now with Tigger and Shadow and I just really go for the bunny puns, the title for the design became Bunny Now and Zen.

The design is now available on products in our CafePress Rabbittude Shop. Some handmade items with the design are in the planning stages for our Etsy shop. ~ Rebecca Pullin