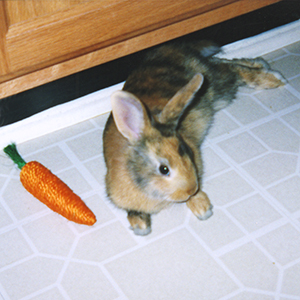 Our little Tigger bunny was unforgettable.  Her looks were  unqiue, but she also packed a truly big rabbit personality into her little bunny size.  The vet she saw the longest summed it up when she said, “Tigger is many things, but stupid isn’t one of them!”  We had many nicknames for her over the years because of the oh so many sides to her looks and personality.

We had read that it helps a rabbit to get to know their name by hearing it in every sentence to associate that name as being theirs.  We talked to her a lot all of her life. At first, we ended almost every sentence with her name.  However, Tigger might have thought at times that her name was “No, Tigger!” or “Tigger, No!”.  We found ourselves saying that a lot as she taught us a whole new level of bunnyproofing.  We didn’t shorten her name or call her anything else until it was clear that she recognized that when we said Tigger, we were talking to her.  In the decade with her, we embraced every possible variant of her name: Tig, Tigs, Tigster, Tiggers, Tiggery, Tiggirl.

It always surprised people who weren’t familiar with rabbits that she knew her name.  She actually came to know a whole lot of words and phrases.  We were certain without doubt she knew her name, because when we had both rabbits and would yell “No Shadow”, Tigger would ignore us.  She knew we weren’t talking to her.  When we called her name, she would react.  It wasn’t always the reaction we wished, but she would react to her name.   We could be across the room and if we started to say, “Good Tigger, Good Bunny”, she would start to tooth purr.  We would be able to see her jaw gently moving as she purred.

How did one very small rabbit come to have so many names? All these nicknames have a story.  By telling you her nicknames now, I am giving a preview of some stories to come.  Tigger packed an awful lot into her decade of life.  She so rarely looked to be really resting.  Most of the time she seemed to be plotting and planning her next move, the next thing she would try.  She was energetic beyond belief for the bulk of her life, right up until just the last few months.  It was like having a living breathing Energizer bunny rabbit who would just keep on going and going.  It was amazing to know her!

Coming Next on Wednesday, meet the Tasmanian Devil bunny.