When we first got Tigger, we had a small pet bed for her that she just loved. I wrote about how she would just put herself in to all kinds of bunny model poses on that bed. When Shadow joined our household a few months later and we started the bonding process, we found that the pet bed was something that was going to have to go because Shadow insisted on eating them. If we gave him opportunity, he would attempt to shred the beds and try to eat them. So we ended up with keeping the beds only for lining carriers on vet visits when it was really cold or they were really sick. 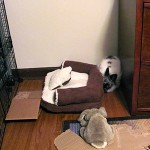 Ring around the pet bed 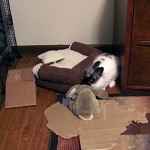 Just nosing around the pet bed 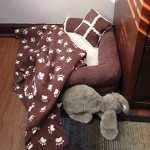 Leo isn’t the chewer that Shadow was and he is a bit more like Tigger in some ways. So when we came across a really cute bed with a big mark down at the pet store, we thought it was worth a shot to see if Leo would like it. I just love the bed which looks like a mini sofa with a throw pillow. Leo has absolutely no idea what to do with it. As you can see from the pictures, he will wander all around it, put front paws on it and that is the full extent of his interest in the pet bed. 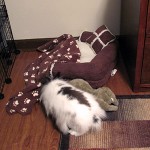 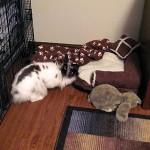 Checking out what is under blankie 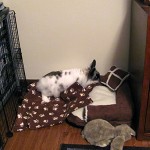 And this is as far as we go

Leo has never once been on it to sit on it or lie down on it. We tried draping his blankie on it since he just loves his blankie and plays with that lying on it, burrowing under it and dragging it around to play with. The blankie draped on the bed was what finally got Leo to at least set his paws on the bed, but that is as far as he was willing to go. You will notice in the pictures that when he appears to put his paws on the bed, he has actually carefully positioned himself so that he is really standing on his blankie.

Unless we get another rabbit who likes the bed, this is likely to be one of the least used pet beds ever. We have had it more than a year now with him and it still looks brand new.

Ah well, there is at least some hope today that Leo might adjust to his new Booda Dome litter box. He stayed in the room with it today for a bit. At some point he did hop in and check it out since I found he had used the facilities. I’ve still got the top off of it waiting to see if he will venture in to the top just sitting on the floor and then maybe we can see if we put it together whether he will hop in and use it.