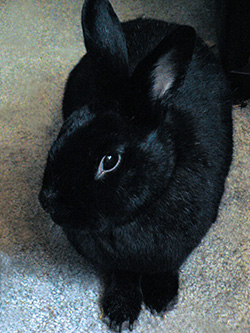 Once again Shadow’s radar ability astonishes. I don’t know how he does it, whether it is sensing or hearing or a combination of both. He is so fine tuned to knowing where and when something is happening that needs his rabbit investigation:

Tigger has the same radar ability, but has less interests than Shadow does.  If you turn on the faucet in the kitchen or start to open a bag of greens, Tigger will be there, dancing on the edge of the dining room rug.  Sometimes she comes skating across the linoleum on the kitchen floor in her excitement to get to new food.

Both have one interest in common, treats!  Rattle anything that sounds like a container with treats and they are not only there, but dancing up and down on their back two legs like crazy rabbits.  Fresh bananas are a special treat and we need to sneak them out to the patio, garage or other areas if we want to eat them in peace.  I thought it was the smell that they were fine tuned to, until I realized that Shadow was repeatedly showing up before I even had the skin off the banana, usually when I first snapped it.  The boy recognizes the sound of a banana about to be opened!

It continues to amaze me just how much rabbits are able to recognize if you give them the chance to interact and roam around freely.