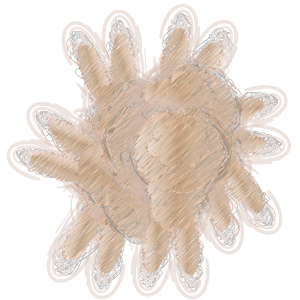 No pictures on this one.  However, they would have been a blur of motion like this abstract drawing where you see the jumble and tumble of swirling bunny parts.  It is a bit dizzying to look at and so was Tigger if you picked her up as a baby bunny.

Tigger was like trying to hold on to the whirling dervish Tasmanian Devil of the Bugs Bunny cartoons.  You saw motion and body parts with brief stops.  Tigger tended not to stop until I would get smart and put her back down.  She made it quite clear that to her the term four on the floor also applied to rabbits.  All four paws were to remain on the floor unless she decided on a lift off.

It was a real exercise to hold on to her safely as she would squirm, wiggle, somersault and do flip-flops in my arms.  In a blur of dizzy speed her head would be up, down, right, left and then repeat the process …  Everywhere the head went the little paws followed and those little paws had kitty sharp claws.  It was early summer in Georgia when we got her, so I was usually in a V neck Tee and shorts.  I would end up scratched all over my arms, legs, neck and Tigger usually managed to get at least one paw hooked into the V neck of my shirt, so I got a good measure of scratches on my chest too.  It was embarrassing to have to admit that a rabbit less than three pounds had mauled me.

I kept trying to pick her because up at first we hadn’t gotten the room with her cage bunnyproofed and I would carry her to the kitchen for run times.  We got that room bunnyproofed pretty quickly and fortunately Tigger was a quick study with the litter box so we didn’t need the easy clean kitchen for long. Then I could allow some of the wounds to heal for a bit.  I continued trying to pick her up but a little less often, attempting to get her used to being held.  Tigger never really got with the whole being held program with one exception that I will talk about in the next post.

We had wanted to try to do nail clippings at home, but always had to take her to the vet for that.  She needed the fear factor of the trip to hold still enough for exams and nail trims.  Even with that fear factor, it would take three people for exams, two to hold her while the vet examined and two people for nail trims, one to hold and one to trim.  Since Tigger’s top weight was never higher than 5 1/2 pounds, it was extremely close quarters for the humans at vet visits trying to hold one very small bunny rabbit still without stepping all over each other.

It was just amazing how strong and agile one small bunny rabbit could be.  Later in life when she needed medicating or cleaning up due to old age issues, she would still run like crazy trying to get away, not wanting to be picked up.  The difference was that when I did pick her up, she would be amenable to getting things over and done with as soon as possible so that I would put her back down.  Still, she was a two person job.  One of us had to hold her, while the other medicated her or worked on fur cleaning issues.  The response to being put back down did not change no matter what her age.  Once she hit the floor, she would hop off a bit flicking her back paws as she went and would then stop and thump once or a few times depending on how violated she felt by our interference with her person.

We tried to respect Tigger’s desire not to be picked up and only picked her up when her care or safety required it.  The rest of the time, we chose to get to know her and let her get to know us on her terms.  We sat on the floor or laid on our stomach or side on the floor, letting her come to us to interact as she chose.  The room she was in at first was a combination guest bedroom / office.  Sometimes we would sit on the floor with our backs up to the bed.  Tigger would hop on our laps and run up our bodies to get up on the bed. Later she learned to take flying leaps up on the bed and would play with us there.  Blaine would take a sock and play a very gentle tug of war by just giving her some resistance with him holding on to the sock so that she was the one actually tugging at it.  That usually tired her out and she would then take a nap between his legs.

Getting to know Tigger on her terms was rewarding.  Many times over the years she would hop up and bestow sweet bunny kisses on our foreheads.  As she slowed down some late in life, we would have the opportunity to lay beside her snuggling for a time while petting her.

Coming Next on Friday, meet the Velcro Rabbit.