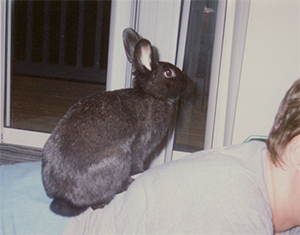 Shadow loved to play.  He was always looking for ways to have fun.  He would try to get Tigger to play with him. Tigger wasn’t a terribly playful bunny, but was very much like a cat and quite serious. She had to be in the mood to play.  So when Shadow wanted to play games, he usually came looking for us.

Shadow would hop underneath us when we were down on the floor on our hands and knees and run back and forth underneath us, head butting our stomachs or hopping up on to our backs for a bunny back ride.  I usually had on really oversized V Neck T-shirts.  One time I was down on all fours talking to Tigger when I felt a tug on my shirt.  I thought Shadow was pulling on it.  I glanced down and got a real surprise, because he had hopped up inside my shirt and was now peeking out through the V Neck looking at me nose to nose.  That is when I discovered if you wear oversized clothing around rabbits, they just might surprise you and join you in wearing the same outfit at the same time!

If we sat on the sofa to read a book or magazine or look at a catalog, we could count on having Shadow hop up and want us to surrender the paper goods.  We started to play a game with pulling out the advertising cards from magazines.  We would hold some of those in our hand peeking out from the side of whatever we were reading.  Shadow would hop up and “steal” the card and take off with it.  Then he would come back for another and another.  We would run out of the cards and have to go gather them up again so that we could keep reading and he could keep playing the game. 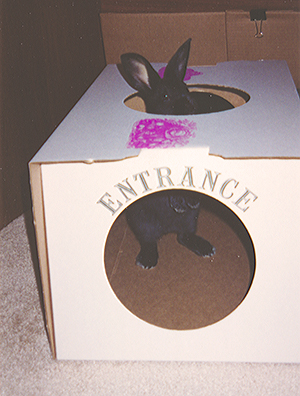 We had a special cardboard box with multiple holes.  Shadow and to a lesser degree Tigger liked to have us give them bunny bus rides. Shadow would hop in the box and wait for us to pick it up and carry him to another location in the room.  Sometimes a bunny bus ride was the only way to get him to go to bed.  He would hop into the box and we would carry it over to his cage and put it down with the hole he was facing right up against the doorway to his cage and he would hop in for the night.  That is unless he was still feeling playful and then it might take a couple of bus rides before he was ready to call it a night.

In the evening, Shadow loved to hop onto the sofa and would pull and dig at me before settling down for snuggles and petting instead.  Sometimes if  I was laying down or semi reclining on the sofa, I would suddenly have a bunny on my hip looking at me eye to eye.  If I happened to be eating something he wanted, he would be hopping up and down on my lap and patting me all over the face, arms and shoulders trying to get a treat.  If it was banana, well then I would have a rabbit actually sticking his little nose right up to my lips as if he was going to go in after that banana he could smell on my breath.  It was like having a pat down with a breath check by the bunny police officer appropriately all dressed in black.