Click here for the video up properly: Binky Day on youtube.com.

So last Wednesday was crazy with tornado siren testing and a loose pack of hounds. Today wasn’t a noise issue throwing things off, but rather a round of internet sites with lots of issues that messed with the planned schedule.  Now that I am trying to catch up and write what I had intended, Leo is letting me know he would really rather have some attention. So I found this wonderful binky video to share.

Enjoy! I will be back tomorrow with some of what is going on at Rabbittude this month. 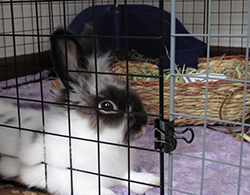 So today was a bit of a trying to catch up day.  I had planned a  special gallery of photos for Leo today but didn’t quite get finished with what I needed for the images and will share that Saturday instead. Time flew by today trying to fit the work of two days into one, since a good chunk of yesterday ended up lost time.

Yesterday was a reminder of how easily rabbit nerves are disturbed by noise.   Leo had way more than his share to deal with. The first Wednesday of every month at noon, they test tornado sirens in our area. The wailing of those sirens even on a sunny day is a very eerie reminder of danger. For some reason yesterday, they ended up doing two separate tests about fifteen minutes apart. That was unsettling and had me looking out the window again to double-check the weather was still bright, sunny and clear.

Then as if that wasn’t enough noise, shortly after the sirens, it became clear there were some hounds hunting in the woods that run behind our home and the homes running along on either side of ours. I could hear them going back and forth off into the distance and then closer behind our house and it was obvious they were hunting and baying loudly as the moved back and forth through the woods. After more than an hour, they came out of the woods on to our property roaming around front to back and it was clear at that point that no one was hunting with them, they had gotten away from someone or their home somehow. It was at least another hour before animal control was able to come and pick them up. Fortunately for the dogs, they had collars with a phone number and were quickly reunited with their owner.

Poor Leo though had a very unsettling afternoon and was clearly not ready to settle down again easily afterwards. I can’t blame him, the sirens and then the continuous baying of the hounds didn’t do great things for my nerves either. When Blaine came home, he sat down to pet Leo and accidentally knocked something and Leo was off like a shot. So no nice nap for Leo yesterday, he spent the afternoon on full bunny alert. Thankfully today has been quiet, so Leo is calm again.