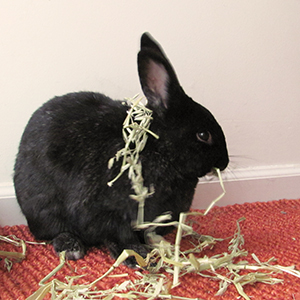 We had a number of nicknames we called Shadow based on his name: Shad, Shadster, Sweet Shadow. His name came from his uncanny ability to hide in plain sight by finding and hanging out in spots where he completely blended in.  He demonstrated throughout his life that he understood the power of camouflage.  One of the most memorable times was shortly after we moved in to our house.  The previous owners had left a black 8 x 10 foot rug in the dining room. The ceiling light was on a dimmer switch that we would have on a low setting when we weren’t using the room.  One evening, I walked in to the dining room when suddenly the carpet in front of me moved.  Shadow had flopped on the black rug and literally disappeared, but had the good sense to move before I accidentally stepped on him.  We switched out the rug soon after for the rust colored jute rug shown in the picture.

For the first year while we were still in an apartment, Shadow  occasionally earned the name Thumper.  He would seemingly without explanation go diving for cover and start thumping a blue streak.  It took awhile to figure out what was setting off the reaction.  He really didn’t like the sound of planes or helicopters.  Once we moved to the house, we were in a much more rural setting and those sounds were rare.

Shadow was Blaine’s shadow bunny and would often follow Blaine around or seek him out when Shadow wanted to play chase.  So Shadow earned the nicknames: Little Man, Little Buddy, Bubba, Spiff, and Junior. One time, I walked in to the dining room and Blaine was bending to look underneath the table and calling Shadow.  Meanwhile Shadow was right beside Blaine sitting up on his hind legs also looking underneath the table in the same direction Blaine was looking.  It was almost as if Shadow was saying, “What are we looking for Dad?”

I wrote in another post about Shadow the Bunny Goat.  I did forget in that post about the bunny goat mystery of how we would keep finding Shadow on top of the dining room table.  It was too high for him to jump up straight up to the table top.  The rabbits could jump up on the chair seats, but we kept the chairs pushed in, so we weren’t sure how he was managing to make it to the table top.  Then Blaine caught him in action using a chair not pushed in quite enough.  It allowed just a few inches of room for Shadow to leap from the chair seat up to the tabletop.  We had to make extra sure the chairs were really pushed in all the way after that.  There were still times though when the rabbits would leap up on the chairs and we would have to chase them around the table as they leapt from chair seat to chair seat attempting to stay out longer at night.  Or they would hop up and down off the seats alternating with running on the floor underneath all the chair and table legs.  It would be the most awkward chase on our part bobbing up and down trying to see which way they were going to try to catch them.

We called him Goose for an obvious reason.  Like a little dog, he loved to sneak up on other creatures and stick his little nose in places it didn’t belong and that weren’t appreciated.  We also called him Digger for the obvious habit of digging out everything he could.  He had an awesome ability to completely dig out litter boxes and spread the litter out over four feet from the box.  We had to get covered litter boxes to try to keep the mess minimized to what he could excavate out the door.

Shadow chewed everything he could sink his little teeth into earning him the names Nibbler, Bunny Jaws and Hoover for his habit of zooming up food or treats we put down. He would pull up carpet strand by strand and put holes in pillows and upholstery to pull the stuffing out.  We had to keep close watch on him when he roamed to try to keep him from eating all the bad things he insisted on chewing.  We tried the spray on chew deterrents we found recommended.  Shadow treated them like appetizers, so we gave up on anything stopping him.

Since he was a sleek very athletic male rabbit, we also called him Mr. Rabbit and Rabbit Man.  Late in life, we switched vets and our little rabbit man got a new nickname courtesy of his new vet tech.  She called him Sexy because of his sleek athletic build and shiny black velvet fur with touches of silver on his nose that she said gave him a very distinguished look.  All that glorious black fur and you didn’t see any other color until he yawned and showed his cute pink mouth and tongue.

He was our Executive Rabbit.  I would be working in the office and would hear him landing in the other office chair and would turn around to barely see a solid black rabbit sitting in a black leather executive chair.  We had a bin on the office floor with a phone book and Shadow took doing his paperwork seriously, coming up to the office and hopping in to go to work as the rabbit paper shredder.

We also called him Lurker.  He loved to lurk at corners just barely peaking around the edge of walls or furniture. Sometimes all we would see was an Alfred Hitchcock style bunny shadow on the wall behind him to let us know he was there.