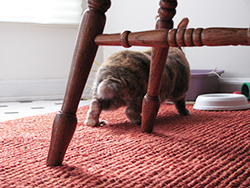 And she is off in a total freakazoid run.  What set of the hare trigger, er Tigger?  We sure haven’t always figured it out right after more than 10 years.  It could be a noise, a movement, almost anything with Tigger.  Tigger has the shortest fuse from relaxed to full-blown panic of any animal we have ever seen.

We have learned that it is possible to have a bunny stampede with only two rabbits.  Something sets Tigger off and she is off at top speed.  Shadow then thinks something bad is going down and he better start running too.  So, off they both go.  Sometimes they are running top speed together side by side in such tandem you would expect to see a little harness or yoke on them.  Sometimes it is one following the other.  Sometimes they take off in completely different directions and yes they have run into each other head on once.

Whatever direction they take off, it is the fastest flurry of movement to see with the pounding sound of racing rabbit paws.  Two of them can sound like a herd as the run and run and run.  We end up furiously talking trying to calm them down and try to follow them carefully.  We want to be able to see where they are to make sure they aren’t smashing into things or each other without following them in a way that makes them feel followed which accelerates the stampede rather than slowing it down.  We have to come at them from the side or angles, not directly from behind or the front.

After a few minutes, the frantic racing stops.  Sometimes it is like throwing a switch back to calm.  It is hard to say sometimes what starts it and also to know sometimes what makes them suddenly realize they are safe again.

Tigger never does anything halfway.  One time something set her off while she was in the makeshift tunnel we have of a sheet draped over several open-ended boxes.  It lasted less than a minute and ended before we could even reach her.  The hare trigger went off and she started to run.  Tigger got herself wrapped up in the sheet, managed to free her feet enough to run herself and the sheet into a hay bowl.  That rolled everything over so that hay and bowl went flying up and then down.  Tigger crawled out from underneath the sheet covered with hay, blinking and teary eyed.  We called the vet and watched that the eyes cleared up by the next morning.  She had just gotten some dust in her eyes.  We think that happened with the roll through the hay bowl which would leave the actual cause of the freak out a mystery.

There have been many times along her ten years that we wondered if the hare trigger would allow her to make it to senior bunny status.  Tigger is living proof that panic attacks alone don’t kill.  However, lots of padding and soft corners in rooms do help to keep rabbits with little hare triggers safer.  We have also noticed that Tigger stays calmer if we are talking to her as we come in to a room or approach her.

Perhaps in Tigger’s case, the hare trigger could be related to poor eyesight.  Since she has always stayed calmer if she hears our voices, maybe she has had visual problems a good part of her life.  We know she does now as a senior bun, some eye issues can now be seen by the vet, but maybe they have been there for quite some time before they could be seen.

So if you too have a rabbit with a hare trigger, see if lots of talking to your rabbit as you move around lessens the problem.