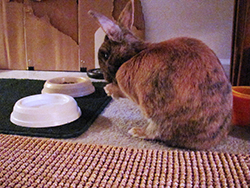 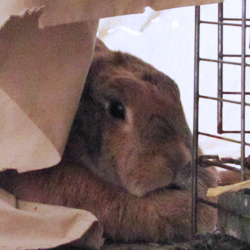 This is going to be a short post today.  We are taking care of a sick Tigger.  This past year she has had a number of times she just seems to shut down and stops drinking and eating without warning, often after really active days.  Numerous vet visits haven’t identified a definitive cause.  She has received treatment for a number of possible causes.   We now have a supply of Oxbow Critical Care and pain meds on hand for times when the trip to the vet isn’t possible, like evenings, weekends and holidays.  Since Tigger is 10 years old, this may be part of the aging process for her.

We are providing supportive care, giving syringe feedings and water.  She is eating her favorite parsley and occasionally some hay.  We have her on pain medicine and are keeping her warm, clean, dry and well-loved.

Taking care of a senior bunny is tricky because so many factors can change as their bodies age, requiring changes in their care and environment.  The House Rabbit Society has an excellent article on many things to be aware of:  Living With An Elder Bun.