Once Upon a Time … Under a Full Bunny Moon …

Courtesy of Leo the Lionhead

There is always something to learn with each new rabbit. With Leo it was experiencing this full bunny moon. I did not realize until this shot that there was an angle for him that was nothing but solid white fur. Then the next realization was that a solid white bunny butt was giving me the very first feeling of truly and memorably being mooned by a rabbit.

Oh and that image on the home page with the snowy white cloud look is actually up close and personal with Leo’s tail. 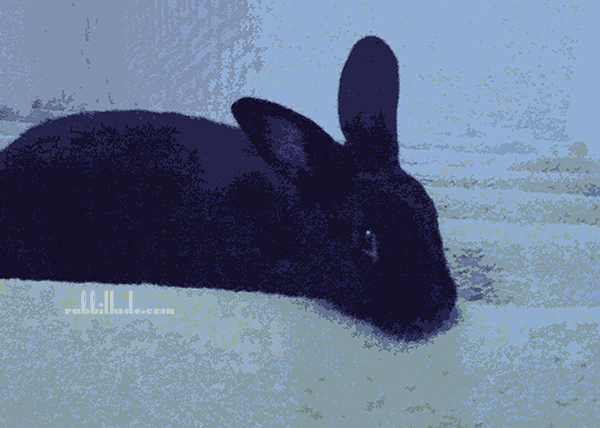 The photo for this altered art piece was captured in such low lighting that viewed as the original photo it is quite grainy in texture. I took the image even though the camera warned me it wouldn’t result in a high quality photograph.  I could see that the camera even in such low lighting was capturing the very sweet expression that so clearly showed Shadow’s big-hearted personality. You just never know when or if you will get another chance to catch expressions with animals. So I took the shot and as I had hoped, it was just lovely as the basis for an altered art piece. 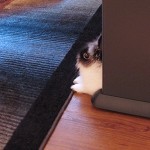 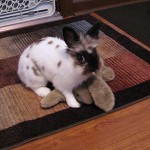 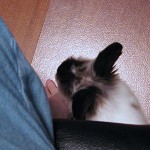 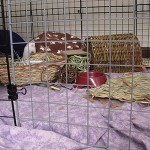 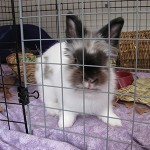 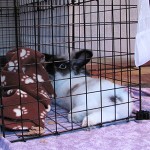 We don’t know a lot about Leo’s personality yet, but what we have seen is reminding us so strongly of Shadow that we keep starting to call him Shadow and then have to stop and correct ourselves.  Leo is very active, playful, boyish and interactive.  That is when his remaining post-neuter hormones aren’t ruling him.  We don’t have lots of stories to tell about him yet as we are just in the early stages of getting to know him.  Like Shadow, Leo likes to lurk at times, just peaking around the edges of furniture.  He also loves to play with toys and like Shadow has a habit of landing his toys in his water bowl.  Unlike Shadow, we have been able to give Leo a blanket.  Shadow would have eaten the blanket and put his digestive system at great risk.  Leo is playing with his blanket and the blanket follows him around his exercise pen.  It too has landed in the water bowl once so far.  Also like Shadow, when I start taking pictures of Leo, he bounces up to find out what I am up to making it hard to get lots of pictures of him in action.

You worked it baby girl!

From early on when the camera would come out, Tigger would pose.  This series of photos was all taken at one time within just a few minutes.  Tigger seemed to instinctively know to show off all sides of herself to the camera.  We really believe she knew she was beautiful.

She had a way of moving that was dainty, delicate, precise and smooth.  Unless she was freaked by something, she was all very coordinated ballet like moves.  She may not have liked being picked up, but she loved attention.  If I brought out a camera and was taking pictures of Shadow and had no idea where Tigger was, usually within just a few minutes she would be hoping in and taking over the photo shoot.

Besides her desire to pose, we called Tigger our model bunny because of her finicky eating habits.  She was always slender, bordering on anorexic thinness and quite fussy about her food.  We always joked she was on the model diet, avoiding eating whenever possible, but grabbing yummy treats from time to time.  Tigger would sniff meal offerings and sometimes hop away.  We would put salad greens on a plastic picnic plate and she would sometimes take the plate and toss the salad.  Other times she would overturn pellet or hay bowls if they weren’t to her taste.  There was nothing physically wrong with her that the vet could find, she was just a really picky eater.

One time when we had Tigger, Shadow and Portia, we received new pellets and hay from our regular company and the taste obviously differed significantly from past seasons.  All three bunnies turned their noses up at the new food.  We got some of the old season and mingled it in with the new and within a couple of days Shadow and Portia were eating it.  Tigger held out for two weeks refusing to touch the new.  We were feeding her lots of greens to make sure she was eating enough and checking her weight too.

We spent a lot of time during the first five years of Tigger’s life following her around begging her to eat.  Then she suddenly started to eat as if she was making up for all the years of lost time.  We said that it was obvious our model bunny had retired and now intended to enjoy life to the full.

We had never thought we would see our Tigger chubby.  The last six years of her life we had to watch that she didn’t eat too much fattening food.  We had to protect Shadow so that she didn’t hassle or attack him trying to steal his treats or push him away from food.  She would run dancing around our feet as we carried food and dive at the plates of greens as soon as they were put down acting like a starving rabbit.  Sometimes she would move to stand on the plate hovering above the food making it hard for Shadow to get his share.  She became chubby at times and we would have to put her on a more restricted diet to get her weight back down again. 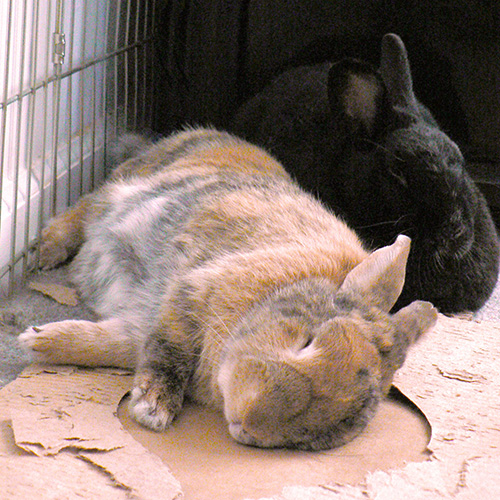 I love this photo. It shows off Tigger’s beautiful fur and her love of laying kitty style on her side. She also loved to have one little paw up by her face, sometimes almost in a sucking her paw look. It was such a cute reflex action of hers. Shadow is in the background doing what he liked to do best, blending into something dark so that it was really hard to truly see him.

Initially, we put Tigger’s cage in the bedroom that we had set up as a combination office / guest bedroom.  We didn’t have the room bunnyproofed at first and Tigger wasn’t litter box trained.  So, when it was time for runtime, we would take her to the kitchen.  The kitchen was both easy to secure by blocking off the only entry into it and easy to clean with linoleum flooring.  Only the spaces around the refrigerator needed blocking. Everything else was cabinets to the floor with no way for a Tigger to disappear or escape.  We blocked one side of the refrigerator by wedging it with a roll of paper towels that she could also chew on while we wedged an upended planter box in to the space on the other side.

We put our regular throw rugs away during Tigger training and purchased some small kitchen rugs that we could easily put in the washer and scattered those on the kitchen floor.  We brought in a litter box filled with paper pellet litter.  We put some cardboard over the only baseboard to prevent her chewing that.  We now had an apartment pet security deposit to protect! We had a washable kitty bed for her to rest on and her carrier with the door off as a hiding box.  She had a water bowl and food bowl on a plant tray to keep those tidy.  The unexpected side benefit of the tray is she liked to flop on it.  The sides supported her and it became bunny furniture.  Tigger also had every bunny loving toy we could think of for her to chew, rattle or throw: empty paper towel rolls, jute / wood small animal chews, cat belled balls, a phone book.

Tigger actually learned to run really well on the linoleum and would go sailing / skating across the floor at unbelievable speed.  Blaine and I would take turns sitting on the floor playing with her and getting her used to both of us.  Here are some of the pictures of those times …

What do I want to do first?

Would you care to explain these weird pellies in with my usual?

Okay, what did I hop in? Maybe you should clean the floor more often?

Would it be asking too much for some privacy here please!

Ahhh ... the bunny yoga stretches are so relaxing ...

Sometimes I just sit and watch, take pictures and enjoy having them with me still …

Well I know it means more winter when the groundhog sees his shadow. So what does it mean when a Tigger sees her shadow? Are we about to be hit with winter early in Georgia? It has been cooler than usual for this time of year.

It was cute to see Tigger pause in her rounds in a way that had the light hitting her just right to give her a shadowy twin.

I took this photo of Tigger and Shadow earlier today.  They were enjoying a bunny brunch of some parsley and carrots.  Shadow is showing part of the personality that earned him the name Shadow.  Tigger is showing just how scruffy a pretty bunny can be when she decides to seriously shed some fur.  Shadow seems to be recovering nicely from Snuffles, but Tigger is only slightly improved on her tummy and appetite issues.  She will eat her greens, but isn’t really eating her hay as she should. 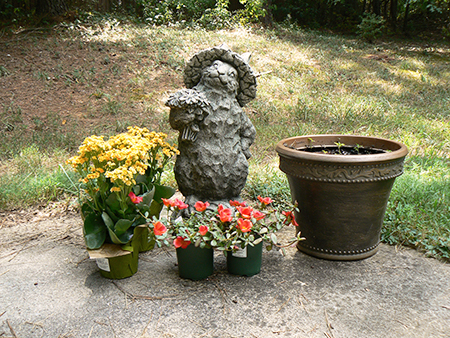 Our sassy garden rabbit supervisor is still minding the plants needing to be potted.  I can just imagine what she is thinking:  ” I’ve been minding these plants for 24 hours now.  You wanted the Purslane to show blooms, now you got blooms!  Get these poor plants into the pot.  Its hot out here and they need to get a good drink and get some rest.”

Our concrete cottontail will just have to wait a bit longer.  Only the black thumb is home right now*.   The green thumb is off at his day job.

* It is sad but true that Blaine took immediate custody of all my house plants when we got engaged, to save their lives.  I’m good with rabbits, awful with plants.