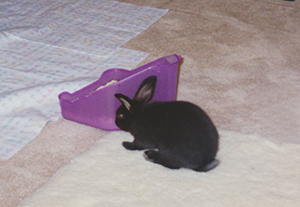 We had a little bit of time to get to know Shadow before we went in to the vet for a once over check up.  We weren’t expecting any surprises.  We believed we had a boy / girl pairing and were keeping the two rabbits apart until they could be fixed.  Granted, Shadow was quite a tiny bunny, so we weren’t basing our feeling that we had a boy on anything we saw.  Rather, we thought Shadow was a boy due to basic bunny functions.  Shadow was still in the process of learning to use a litter box.  While learning, if Shadow was sitting by a wall and the urge hit, the little squirt would spray the wall behind, not the floor underneath. Also, Shadow just seemed so very boyish in actions and play which was a real contrast to the dainty femininity that Tigger displayed.  They seemed to be opposites.

So on visiting the vet, we were quite surprised when the vet told us we had another girl.  We strongly questioned that opinion based on the spraying activity we had seen and Shadow was taken out of the room for an exam by another vet.  The second opinion was the same that we had another girl.  We were told we should go ahead and schedule both spays for the end of August.

We did set up the appointments, but didn’t say much until we hit the car when Blaine exclaimed he knew a male spray when he saw one.  I agreed and said I didn’t think the vets had this one right and we would proceed as we had been assuming that we had a boy / girl pair.  It did make for a weird couple of months wondering about Shadow’s he /she status.  Although we really felt we had a boy, just in case we were wrong, we weren’t quite sure whether to refer to him / her or say he / she.  Mostly, we just stuck to saying Shadow and trying not to wrap our brains around the confusion.

Jumping ahead instead of leaving you hanging for the rest of the story, a couple of weeks before the date of the spays, I noticed the fur starting to change color in two oval shapes on Shadow’s underside.  The placement looked just exactly right for what I remembered from our family bunny Thumper’s male rabbit anatomy.  I told Blaine that I thought that Shadow had a surprise planned for the vet and was dropping down testicles.  I remembered that had occurred with Thumper too between about three and four months of age.

When it came the day of the “spays”, we had intended to tell the vet right away that we thought Shadow had a surprise for him.  However, as I wrote before, Tigger injured her teeth the morning of the surgeries and when we arrived at the vet, we were talking about the need to examine Tigger’s injury and forgot to mention Shadow’s new revelation.  We got a call shortly after we left.  It was the vet telling us that he couldn’t spay Shadow, he was going to have to neuter him.  He told us Shadow was going to be a bit more peeved than the usual male rabbit after the surgery since the vet tech had done a belly shave before the vet had done his exam and realized the tummy shave wasn’t going to be needed.  Fortunately for us, Shadow was a very good boy, a real little gentleman, and his early vet visits and surgery were no problem at all.