This is the final treasury that where all items are from Etsy Rabbit team member shops to highlight all the variety on the team.  Tomorrow I will share an invitation treasury and a story.  Party planning almost always has an oops and this one does too …

Today a cute and colorful treasury of mostly bunny rabbit items created by members of the Etsy Rabbits team.  The variety in exploring the shops is bunderful!  Tomorrow I will have my last treasury rounding out the Etsy Rabbits team members who were members at the start of September and don’t have their shops on vacation.  I plan a few more bunny rabbit themed treasuries up through International Rabbit Day that will include team members but will also widen out to even more of the bunny rabbit items available from all shops on Etsy.

Click on image to go to treasury on Etsy

Today brings another colorful treasury of items created by Etsy Rabbits team members.  Check out what the rabbits have to offer.  Here is a link to the team blog:  http://etsyrabbits.blogspot.com.

Click image above to go to treasury to view items

Here is my second of six planned treasuries this week. I am going to be a one person bunny blitz for visually getting the word out to the members of the Etsy Rabbits team and Etsy about International Rabbit Day being September 24th.  The six treasuries I have created for this week will showcase one item each from 96 of the 97 active shops of Etsy Rabbits team members.  The only shop I won’t be putting into a treasury is Rabbittude, since treasury promotion isn’t intended to showcase yourself.

I hope to spur bunny rabbits to really start hopping in to Etsy treasuries in force this month! 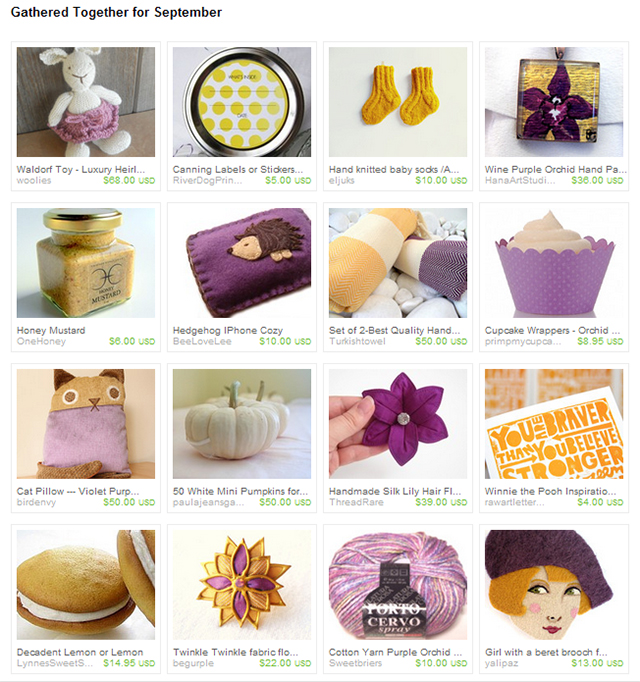 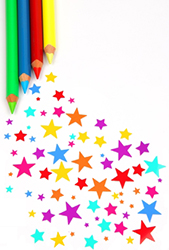 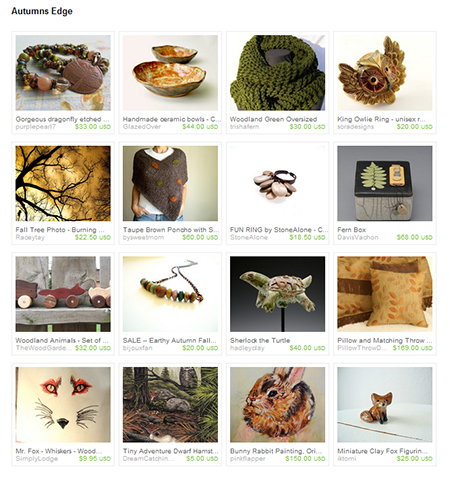 Click image above to go to treasury and view items

This week, I find myself dealing with an on and off summer cold or allergy. So today I felt like visualizing myself enjoying one of those crisp clean days of autumn walking out in the woods where everything is so fresh and clean and you feel so good. It is not too hot or cold, the birds are singing, little animals are scurrying and nature’s fall colors are gorgeous.

I love to create treasuries on Etsy since I can take myself visually anywhere I want to go with them. At the same time I can show some goodwill to other sellers by featuring their lovely items. Enjoy! 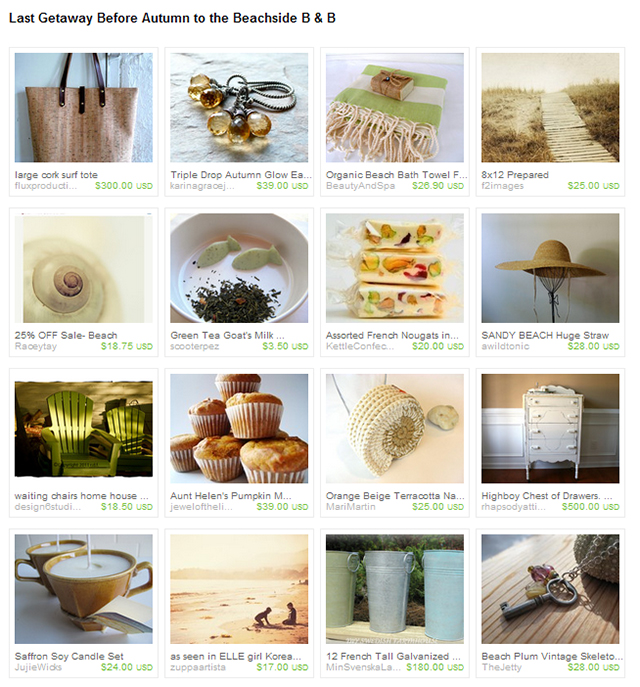 Late last night, I discovered that our Etsy shop has received Google syndication so that it appears in the Google shopping results. This has been a hotly debated subject on Etsy since the rollout for this syndication of Etsy shops began sometime last year. I have seen reports from shops that it helped a lot while other sellers say they haven’t seen any difference at all in their views or sales.

With a tough economy though, many want to believe that getting into that extra place will be the thing that gets them to the sales level they are seeking. So the slowness of Etsy and Google making this happen for all Etsy sellers is causing a lot of negativity. Many of the unsyndicated feel they aren’t on an even playing field.

The jury is out for us on this one until some time has passed.  Since summer is a slower time for people looking for bunny rabbit items, unless they are a true rabbit enthusiast, it may not make much difference for us receiving this syndication now. Springtime would have provided a better testing time for Rabbittude.  We will keep to our plans and see what this does or doesn’t do for our views and sales going forward. At least now in the Google shopping, items from our CafePress store and Etsy shop are appearing together to give people who are finding us for the first time a wider variety of choices.

Learning we were syndicated did prompt a really good look over all our current listings to make sure they met the rules to be picked up by the feed.  I was editing late into the night.  Then this morning Blaine was going back through and reviewing, looking for typos or things that didn’t make sense.  That provided a funny view of the difference in how the guys view descriptions.  Blaine told me I had a problem on one listing.  I asked which one and his response was, “the silver bunny earrings with violet whatevers”.  Which was his translation of  Sterling Bunny Rabbit Earrings, Violet Swarovski Butterflys.

Changing subjects to Poo in review:  In The Wonderful World of Bunny Poo, I talked about a Creative Breakroom challenge I had seen for “Jars O Crap”.  Even though the challenge is past, I was going to do an upscaled bunny poo in a jar product picture and description a la that challenge theme for fun.  However, my rabbits aren’t the poo producers I had thought.  Well they are, but they aren’t as messy outside the box as I thought which is the best means of collecting clean dry poo.  Either they have gotten very tidy right when I decided to collect a small jar of their random poos, or they were never as messy as I assumed.  Live and learn.  If I ever get a jar collected, I will do a blog post with my hypthetical product listing.

Tomorrow I will share some photos.  The first week of August has been designated as a Simplify Your Life week.  So, I have posts planned starting Monday on how to simplify and make things easier with house rabbits as part of the household equation.  I will share a lot of the things we have discovered and learned that have helped us.