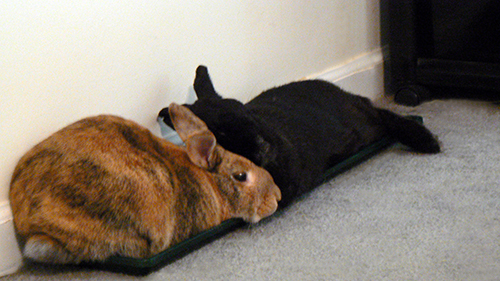 This is Tigger & Shadow on their plant tray lounger. They are covering so much of it you can barely see it the dark green edges of it. When we brought them home as babies, we looked around first at things we had that we could use for them. Then if we didn’t have something we could repurpose, we would look for things to buy. We had some green plastic plant trays about 6 inches wide by 30-36 inches long that we weren’t using. The pictures below show how we thought those plant trays would be used, to hold their pellet and water bowls in their play areas. We naïvely thought that trays would be used as trays to catch spilled food or water. 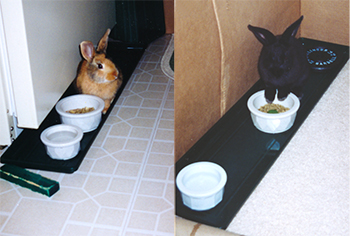 Little did we know, but the bunnies showed us that the plant trays were actually the perfect size for bunny furniture. Over the years, they would lounge on them and especially when older, I think they liked the ease of getting on and off them, but also still having a bit of support with the low sides. Perhaps part of their liking might also have been that the trays were plastic and maybe a bit cooler than the carpet on some of the hotter Georgia days.

I included a link in the first paragraph to clearly see a picture of the type of tray we used. These are available lots of places, but I am using Amazon for some sample pictures of things we have used with the rabbits, since I can pin things on Amazon to our new Pinterest board: House Rabbits at Home. I plan to use that board to show some of the things that we have used or are planning to try now with Leo so that others can get ideas or give comments on items on the board if they have used similar things.